Four months had passed since the kick off of our awesome blockchain developers meetup. So far we’ve had very good speakers and topics. Moreover, we are happy to see new faces in the rows and to see our community growing.

This time we had a small technical issue, the youtube live stream crashed a few times and we were unable to fix it on time, so we couldn’t record the whole session and we would like to apologize for that to the people watching us online. In this post, we will share with you the essence of yesterday’s meet-up.

The event went as follows.

In the first part

We covered crypto related news covering Forks, Security, and technology advancements, without going into many technical details. In the second part we have our fantastic speaker Preslav Mihaylov, head of blockchain training at Software University (SoftUni Sofia), introduce the public to Solidity Assembly.

Let’s look more into the details …

Our CEO Milen Radkov went to meet with some cool guys at Web Summit in Lisbon, so this time our Business Development Manager Hristo led the party — it was about time someone else to do so.

We spoke about the recently released Cardano Rust Project, which is basically an API allowing third-party developers to dive into Cardano. It is worth mentioning that the project is a toolkit compatible for iOS, Web, and Android.

Secondly, we discussed the rise of the Bitcoin sidechains with the release of Blockstream’s Liquid Network. An alternative to the Lightning network but with focus on exchanges and the big financial institutions(worth having a look at).

We did not miss to mention the unsuccessful release of Constantinople Hard Fork that did not manage to sync after launch with the Testnet. Few reasons were mentioned by Afri Schoedon, Parity dev and the takeaway is that the fork will be delayed until sometime in 2019.

Next, we looked at a rather worrisome report saying that over 54% of the 100 top daily volume exchanges have security issues. And the most common issues are related to:

Next topic was the exiting release of Sapling, Zcash hard fork allowing shielded transfers to be completed with 100 times less memory (around 40mb) and probably six or more times faster. With this upgrade Zcash confidential transactions are getting mobile friendly because one does not need to run a full node anymore to run them. Zcash are bringing to us their awesome technology that will lead to us to the era of “privacy-by-default”.

Just before the end of the news review, we mentioned the first Truckload Shipment Using Bitcoin Smart Contracts with Rootstock (RSK). During the shipment, the Funds for the transaction were held in escrow by the smart contract on the integrated RSK platform and were automatically released to the carrier upon delivery.

And lastly, we discussed a recent EOS report pointing out the EOS has misled the public on the number of transaction that it can handle. The study was funded by the Bounties Network which is led by Brent Xu of ConsenSys and for this purpose replicated the EOS network to analyze its performance during two months of testing. The conclusions it reached are fairly damning. They say, for example:

— “EOS is not a blockchain, rather a distributed homogeneous database management system, a clear distinction in that their transactions are not cryptographically validated.”

— “The performance metrics observed when factors such as real-world network latency and packet loss are implemented indicate that TPS in EOS approaches levels comparable to Ethereum.”

— Various forms of consensus failure were shown in the network testing. Consensus is entirely dependent upon the voting mechanism which is based on social consensus, not algorithmic BFT consensus.”

Before we dive into Assembly, Preslav gave to the audience an overview of Assembly Language and the Programming Language Types.

We also looked at how they actually work:

Preslav explained the benefits of using Solidity Assembly, but also did not miss to explain the risks related to using it. Using Assembly to achieve features that are not yet introduced into Solidity can come to a high price if one messes up the opcode.

During the Live Demo, we have been introduced to Basic Operations in Assembly aiming to boost developers confidence when they encounter Assembly at work.

At the last part of Preslav’s presentation, we discussed the different types of memory in the EVM and their particularities.

Looking forward to meeting you on our next meetup.

If you liked this article don’t hesitate to follow us on Medium. We are committed to developing the best Blockchain Developers Community in Europe!

Special thanks to our guest lecturer Preslav Mihaylov and to the host of our fourth meetup SoftUni.

News Sources mentioned in the meetup

If you are interested in talking on some cool topic, or you want to propose some topic to be discussed — just drop us a line at events@hack.bg or write down a comment / reply.

If you want to be informed for our next events and meetups — join us: 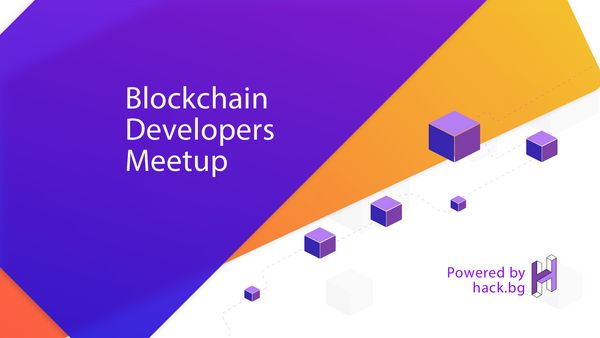 In this group, we will share knowledge about blockchain and smart contract development. We will talk about Ethereum, Aeternity, Polkadot, NEO, EOS, RSK, Hyperledger and other …

Check out this Meetup Group →